Skip to main content
Enjoy 20% off full-price items or 25% off* if you join as a Soho Friends member today
Soho House and Soho Friends members, log in to enjoy an additional 10% off on top of your member rate*
Book your complimentary interior design consultation with Soho Home Design

You probably recognise Gugu Mbatha-Raw from one of her many high-profile stage and screen roles - she's played everyone from Juliet to Andrew Garfield's Romeo to Ophelia with Jude Law in Hamlet, not to mention The Morning Show and Loki (merely Disney+'s most-watched Marvel series ever). But away from her impressive acting career, Mbatha-Raw has been toiling away in a new, somewhat more personal role - as an aspiring artist.

Art - specifically, painting - is a long-standing passion of hers and she's really very good at it. During lockdown, the star became something of a viral sensation for her portraits of George Floyd and Breonna Taylor, which she auctioned off, donating proceeds to social justice charities. She's since shared further works of Chadwick Boseman, Desmond Tutu and Kevin Hart - her co-star in her newest movie, Lift - to her Instagram page. The paintings are genuinely brilliant (Hart's is especially impressive when you learn that she had Covid while painting it).

'That was one of the first paintings I've given as a gift,' she admits, of the portrait she presented to Hart on their last day of filming. 'The film [Lift] is all about an art heist, so we visited The National Gallery with the director. I studied art at school and Kevin developed his interest over the course of the movie - and he's in a place where he can buy some serious paintings, you know? So, I said, "Well this could be one to add to the collection - hopefully it will increase in value over the years",' she laughs. 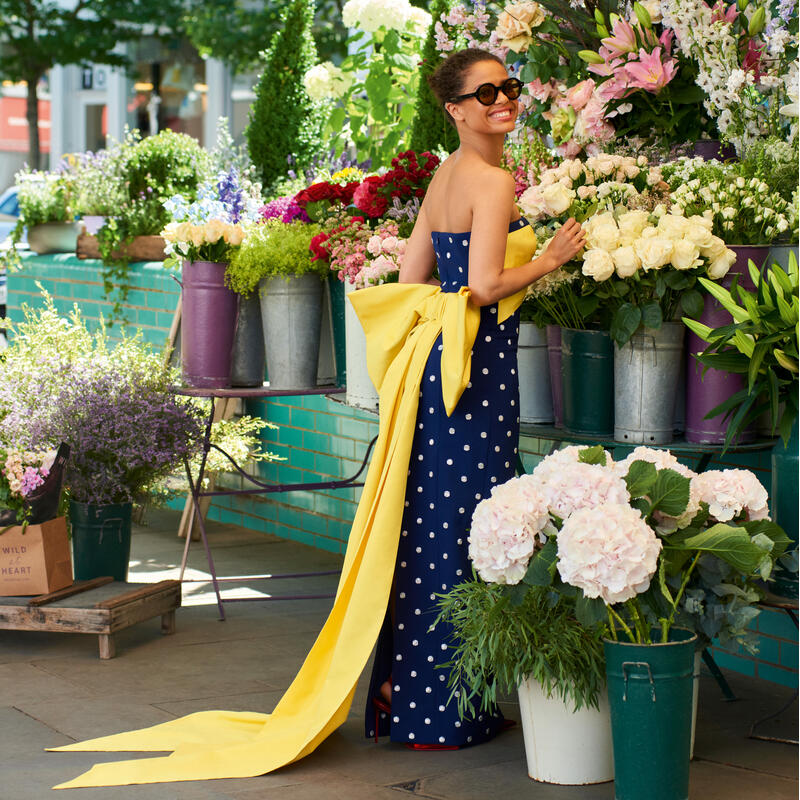 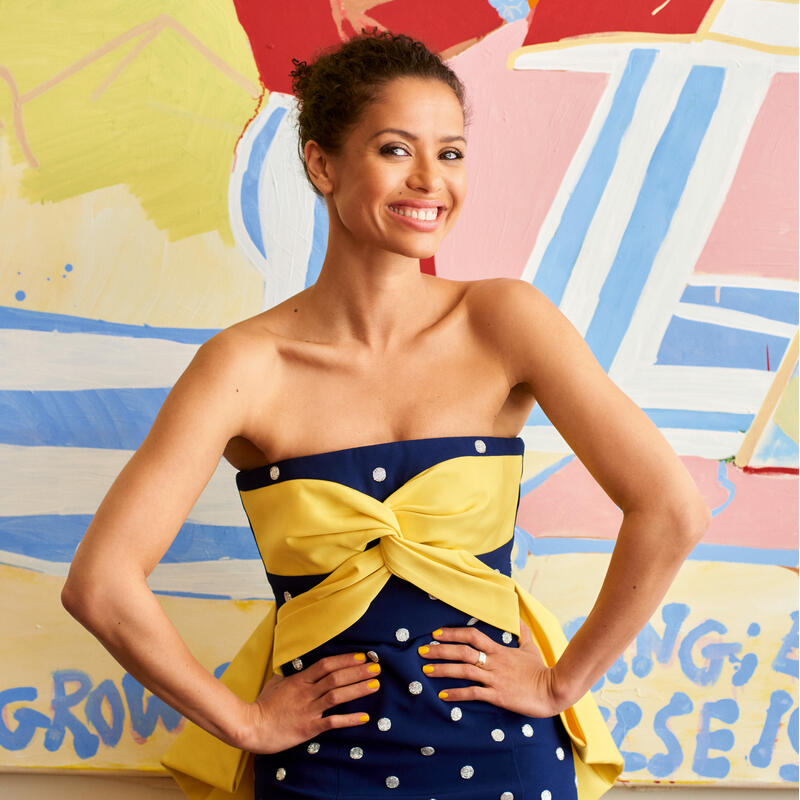 We're meeting Mbatha-Raw for a shoot at our new Soho.Home.Studio in Westbourne Grove, London. Just a stone's throw from Electric House, the new interior design space showcases Soho Home collections inspired by the cities Soho House is located in (think handcrafted furniture alongside textiles, lighting and tableware). Situated over two floors, it features a dedicated interior design service, as well as limited-edition artwork from Soho Home's ongoing collaborations. The timing of her visit is somewhat fortuitous, since Mbatha-Raw has recently swapped her West Hollywood apartment for a house in her old stomping ground of Oxford (she was born in nearby Whitney) and is currently on the hunt for interiors inspiration.

'The mirrors are really fun and I love the small, swivelling armchairs - they have a very 1950s yet modern vibe,' she enthuses, zeroing in on the Garrett chair, while taking snaps on her phone of every item that takes her fancy. She's particularly drawn to the rotating artwork in store, which is created in collaboration with M.A.H Gallery. 'I'm really attracted to the idea of having a relatively neutral canvas and depending on your mood or the season, changing the tone of the space through art. Home is somewhere I want to relax and I find colour very energising - which is good sometimes, but not when you're resting.'

How would she describe her own interior style? 'I've been so nomadic over the years, it's probably a hybrid of the West Coast and old-school London. I've never had a "style" because I've spent the last 10 to 15 years living out of suitcases, so it ends up being quite eclectic. If you're always on the move, you're unable to have clutter. I like quite a clean, calming space.' It figures then that her favourite room is her bathroom. 'I love the sanctuary of a big bathtub and a bit of downtime, especially when you're jet-lagged after travelling or decompressing from a busy day on set.' 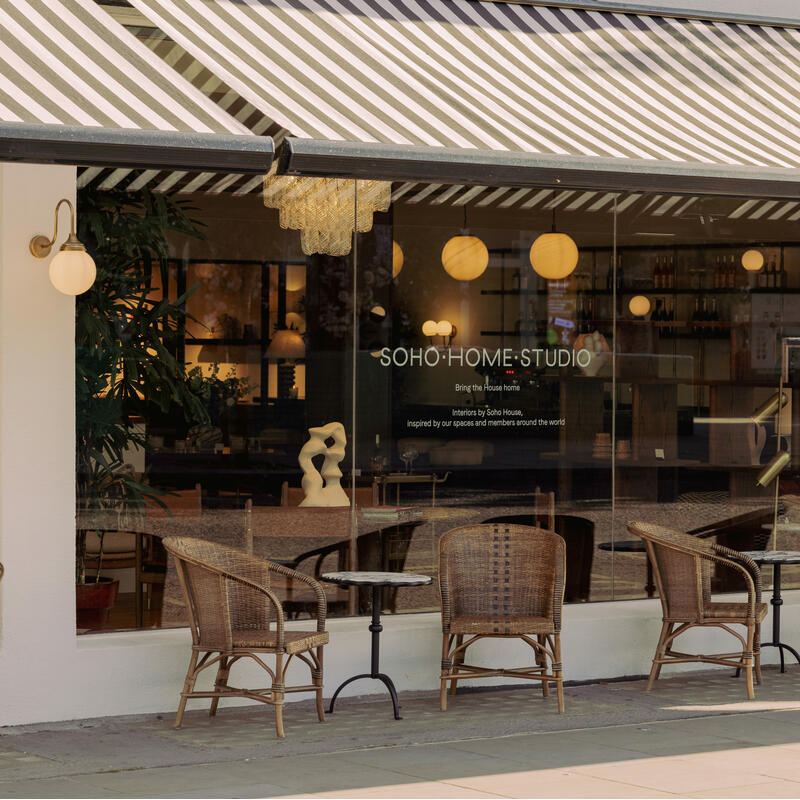 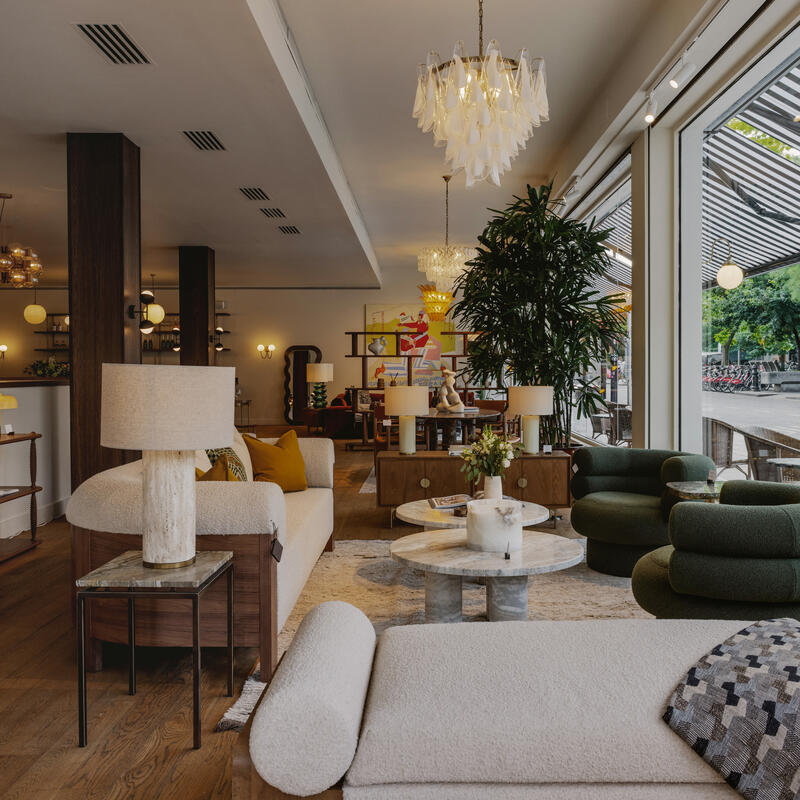 While she's still 'very much beginning' with her new space, Mbatha-Raw's own personal art collection already boasts two very treasured pieces. The first is a 'wrap gift' she recently treated herself to (a painting by a friend where the proceeds helped to support Ukrainian refugee artists). The second? A nod to her latest role in Apple TV's Surface (aka the psychological thriller everyone is going to be talking about).

'I have a massive painting in my house from the set,' she explains. 'It's a copy of "Ophelia" by [John Everett] Millais, a painting I've been obsessed with since I was 12. Weirdly, the writer of Surface, in episode five, heavily featured this artwork. When I read the script, I thought, "You are kidding me". I was also actually standing in front of a print of it when I got offered Ophelia [in the West End], so I feel like this painting has haunted my life - in a good way. In the trailer, you'll see we recreate it. It was very surreal to step into it after years of admiring it. At the end of the show, they said, "Do you want anything from the set?"- so I've got the replica, which is very special to me.'

Surface - which Mbatha-Raw both stars in and co-produced - is set in San Francisco, and the slick, sprawling interiors (her character lives in an enviably decadent townhouse) were an important element to consider. 'The luxurious house they live in, the interior design and that whole production design side is a big part of the show,' she explains. It was filmed predominantly in Vancouver at the height of the pandemic. 'Canada was completely closed,' she says, recalling a lonely two-week isolation period in a hotel room before being allowed on set. 'Coming out of that and going into costume fittings, horse riding and underwater rehearsals… it was quite intense, and such a meaty role.' 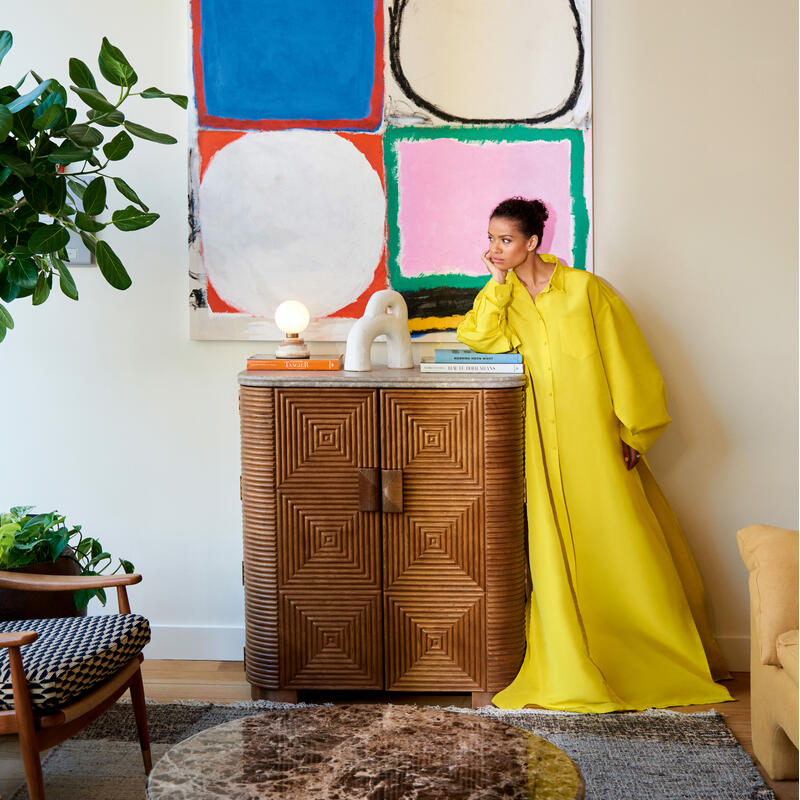 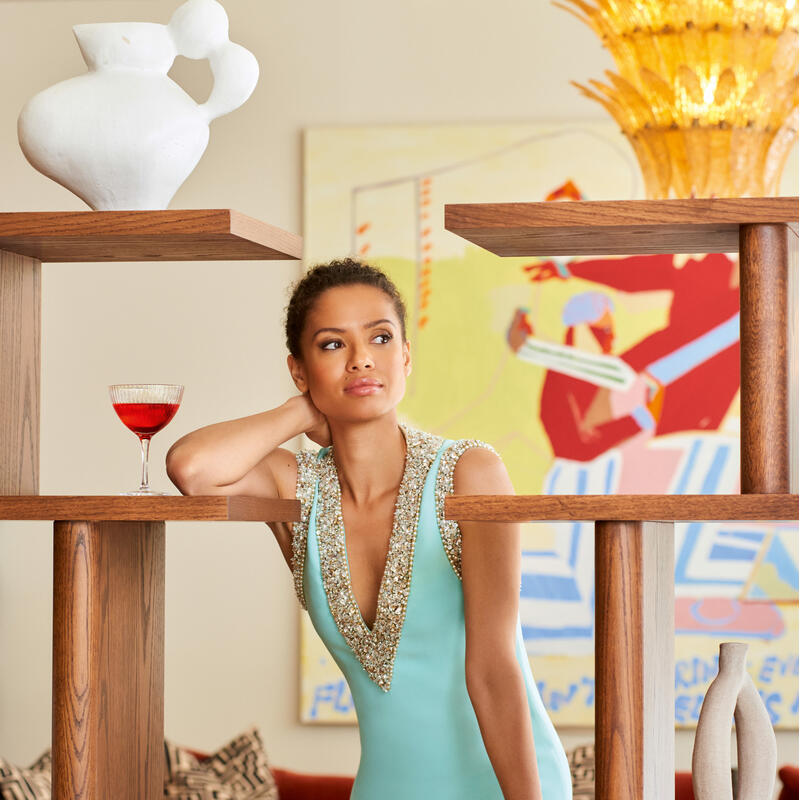 The eight-part action-packed series sees Mbatha-Raw play Sophie, who having lost her memory in dramatic circumstances, is on a desperate mission to uncover her past. 'She was a different character to approach,' she says. 'I was building her on screen at the same time as the audience discover her - normally you create a character's backstory before you go in front of the camera. This was the reverse.'

Taking on the role of executive producer meant Mbatha-Raw joined the ranks of fellow producers Reese Witherspoon (her production company Hello Sunshine was at the helm) and Sam Miller (Luther, I May Destroy You), alongside showrunner Veronica West (High Fidelity, Ugly Betty). How easy is it to separate yourself as an actor while producing? 'I have never enjoyed watching myself,' she says, frankly. 'I've tried to watch everything I've done at least once, but I've always found it challenging. So, I had to tough it up with my producer hat on. The learning curve for me was to look at the episode and dynamics of the show as a whole, rather than just my performance.'

It also meant that Mbatha-Raw enjoyed sitting on the other side of the casting couch for once - albeit over Zoom. 'During the various stages of lockdown, we were connected via Zoom to the writer's room with other producers,' she explains. 'For many years I've auditioned for directors, so the shoe was on the other foot. You're actually thinking about the DNA and tone of the show, and making choices about who you're going to collaborate with - from the composer to the costume designer. Being a part of those decisions was really fascinating, because you get to be a part of shaping the whole show as opposed to just your character.' 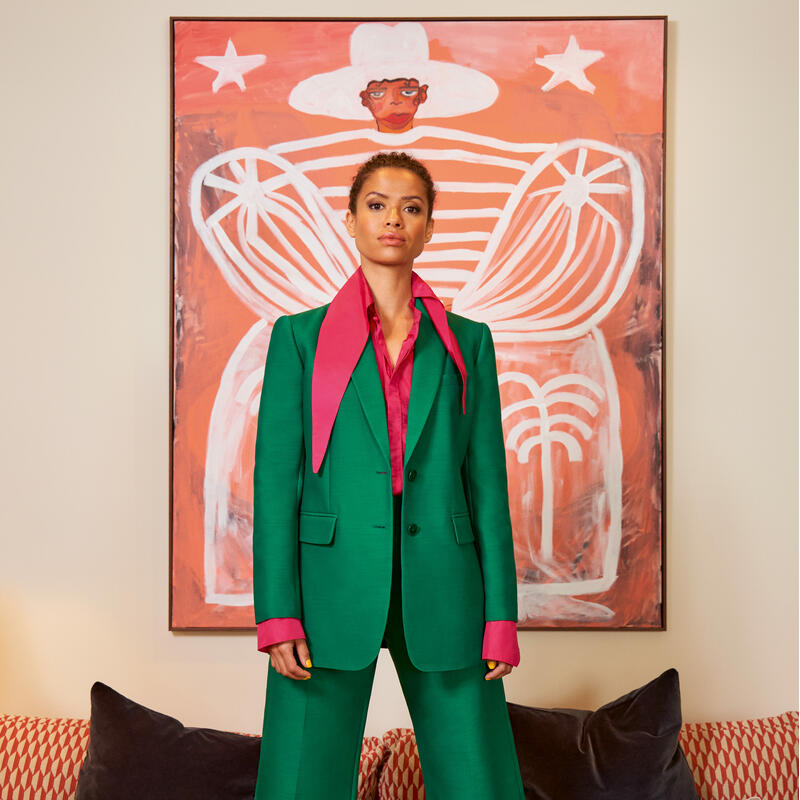 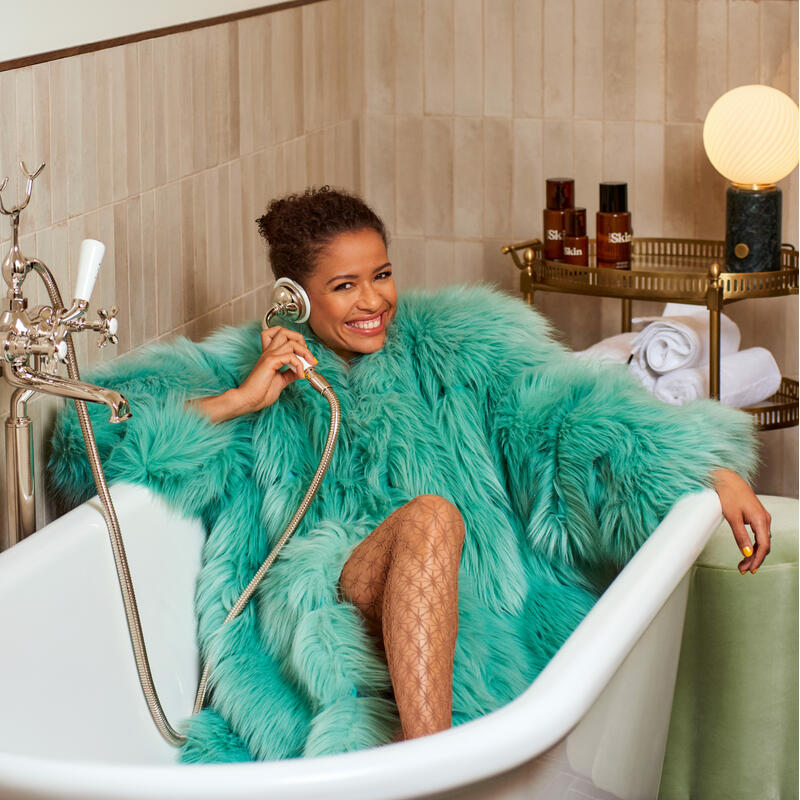 Above left: blazer, shirt and trousers, all Valentino; above right: coat, Gucci

Mbatha-Raw's mother, Anne, a British nurse, and father, Patrick, a South African doctor, separated when she was small and she describes herself as being a 'very extroverted' only child. 'As a child I had a lot of energy - I was very joyful and playful, always messing around, putting on plays in the living room.' She cites musicals ('I was obsessed with Andrew Lloyd Webber') and Tina Turner as inspiration. 'I remember going through a phase when I was very young, around seven. Although I didn't really know much about Tina, I think the power of her and her stance - and obviously her hair and theatrical persona - definitely appealed to me.'

Mbatha-Raw credits her mother with instilling a sense of confidence in her that you'd imagine comes in fairly useful in Hollywood today, as well as nurturing her passion for art. 'I wasn't a "pretty little girl",' she explains. 'I had short, bobbly hair and looked like a boy until I was six. And I feel thankful in a way. I was never the kind of child who therefore had a value system based on looks. I got my validation from things I'd accomplished and enjoyed. My mum always let me express myself. When I'd take over the living room floor with my art projects, she was always very good-natured about allowing me to do that. I realise, in hindsight, that's not the case for everyone to have that kind of freedom.'

On the subject of influence, I ask which of her A-list co-stars has had the biggest impact on her. 'I learnt a lot from Miranda Richardson on Belle, because there was a certain situation where something wasn't working for her. And she was able to say "no' quite concisely. It wasn't aggressive, it wasn't confrontational, it was just the end of the conversation. I remember thinking, "That's genius - if I could learn how to make my "no" a complete sentence, that would be a real achievement". Having good boundaries in this business is really important.'

After our Soho.Home.Studio shoot, Mbatha-Raw is heading back stateside to film The Tonight Show With Jimmy Fallon in New York to talk about Surface. It means she's sharing the couch with none other than Ryan Gosling. Is she nervous? 'I'm about to do the Jimmy Fallon show with Ryan Gosling, which for me is not normal,' she cackles. 'I mean, as an actor you're used to playing a "character" and having a script, and then suddenly you're like, "Oh God, I've got to be myself?" The American talk show is quite a fine art. I try not to overthink it...'

It's the same polite, somewhat self-depreciating tone she responds to my gushing praise of her artwork with. But much like Mbatha-Raw's portraits, I'm left with the distinct impression she's got this one firmly in the bag. 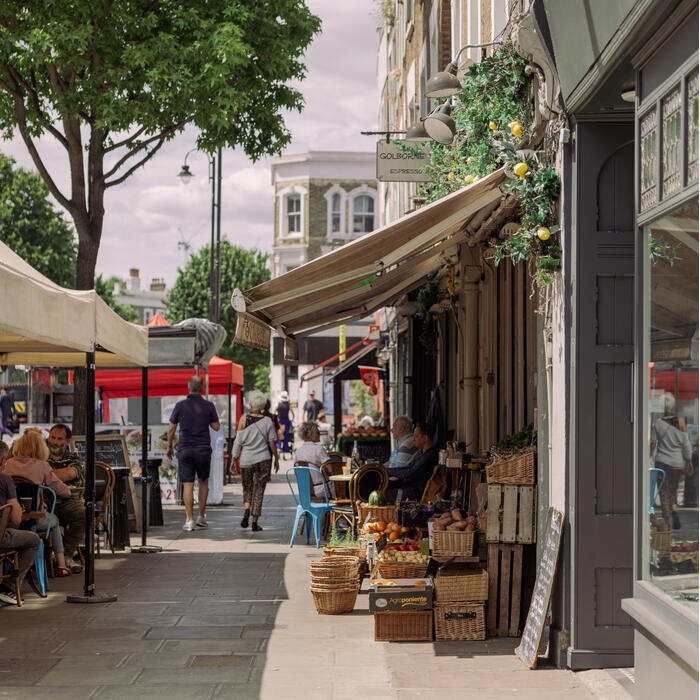 An interior enthusiast’s guide to Westbourne Grove with Amira Hashish 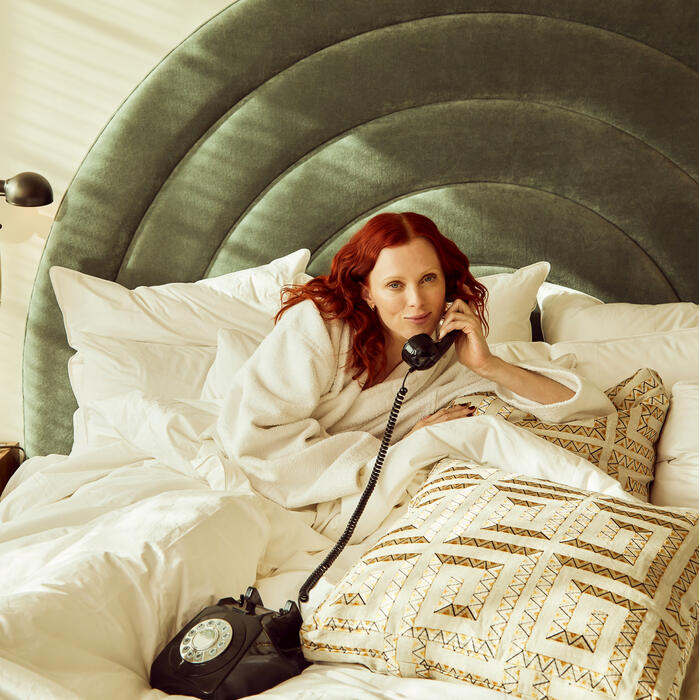 Wake up in Soho House Nashville with Karen Elson 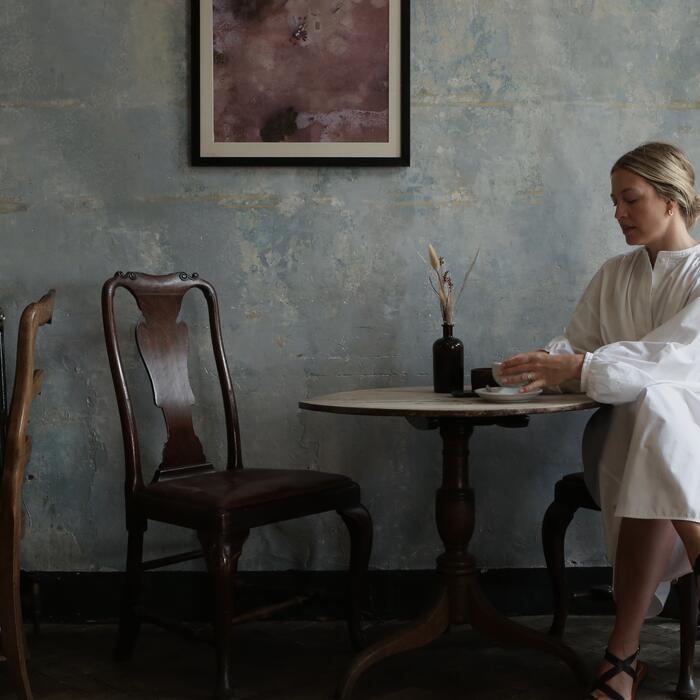 An interior enthusiast’s guide to Brighton with Alexis Foreman