As Editor in Chief of ELLE Decoration UK, Michelle Ogundehin imperceptibly shaped the way our homes look and feel over the past 20 years. Never afraid to confront the mundane practicalities of domestic design (such as where to hide the food caddy), her approach to interiors is refreshingly unpretentious, while still inspiring her readers to make their spaces comfortable, beautiful and always personal. As she prepares to embark upon a new chapter in her life and career, she reflects on what she's learned, the joys of social media and how to make a house feel like a home.

When I was wondering what to study at university, my dad was always banging on about the importance of a ‘vocational degree’ and having a ‘profession’. At the time, I understood this to mean law, medicine or architecture. I was way too squeamish to contemplate being a doctor, and I thought being a lawyer sounded deadly dull, so architecture it had to be. As it happened, architecture is a perfect confluence of the creative and the practical, so it suited me perfectly as someone who’s equally as right-brained as I am left-brained. It was also an amazing education in how to convey experiential concepts in 2D. It taught me early on that how a place makes you feel is as important as the way it looks. But the challenge is how do you sell the concept of either before it physically exists? In architecture, as in magazines, it’s about seducing with a dream. Painting pictures in someone else’s mind’s eye to help them imagine what you can see.

I’ve always loved magazines with a mad passion. It’s that marriage of word and picture to communicate an idea on paper that I love. I literally have stacks of them carefully archived in my basement! So it was only a matter of time before it occurred to me that I could actually work in print rather than just be an avid consumer of it. It also appealed because as a true child of the media age, the idea of publishing something new every month versus waiting years for something to be built was too compelling, so I turned my back on architecture and went into writing about it instead.

'My first editorial job was at Blueprint magazine, then edited by Deyan Sudjic, who's now the Director of the Design Museum. We worked out of a wonky little building behind Marylebone High Street that's long since been knocked down to become a Waitrose. It was an incredibly fast track induction to every aspect of publishing as we were such a small team. Funny, too, to think that I started off working for £25 a day! From time to time, stories would come in that weren't right for us as a trade title, so I'd send them across to ELLE Decoration. Eventually, Ilse [Crawford] invited me to interview to be her Features Director… across I hopped, and 20 years later, I was still there!'

'Sadly, a year after I joined, she left to do her first interior project for Soho House. She'd also just published her 'Sensual Home' book. It was very inspiring to see her practice in the real world what she'd espoused so fervently in the magazine. And certainly, it embedded the allure of Soho House deep into my DNA. From that moment on, it never occurred to me to join any other member's club.'

'After over 13 years as Editor in. Chief, I'm stepping aside to become Editor at Large. Developing a brand like ELLE Decoration is so much more than just editing the magazine. It's a 360-degree, 24/7 endeavour, and after doing it for as long as I have, although it's like ripping off a limb, it's time for me to start realising other dreams, alongside writing a book, doing more TV and building my own consultancy. There's a great quote from Brian Dyson, a former CEO of Coca Cola, that encapsulates where I'm at. He said, "Imagine life as a game in which you are juggling some five balls in the air. You name them Work, Family, Health, Friends and Spirit, and you're keeping all of these in the air. You will soon understand that work is a rubber ball. If you drop it, it will bounce back. But the other four balls are made of glass. If you drop one of these; they will be irrevocably scuffed, marked, nicked, damaged or even shattered. They will never be the same. You must understand that and strive for it."'

'I love social media! When used well it's a fabulously instant, global, communication tool, and it's free, so what's not to love?! Especially Instagram. My feed is all about editing the world for inspiration, one colour at a time, to create what I call colourscapes. It's a wonderful way to share my obsession with the home and good design, and to promote other people with a great eye. I do it primarily for myself though. I see it as a rolling visual notebook of stuff I love. I've never taken a selfie in my life though! I find that culture supremely odd. And I don't understand the whole FOMO phenomena. As far as I'm concerned, the best party is always the one I'm at, even if that's home alone on my sofa in front of Grand Designs! There is nothing that the dulcet tones of Kevin McCloud and a tub of Booja Booja Salted Caramel Chocolate ice-cream (you won't believe it's non-dairy) can't soothe.'

'Pinterest, too, can be a marvellous force for the greater good. If you're struggling to articulate what you like, here's a tool that enables you to easily rummage around the entire internet and stick all the bits you like together, and once you start doing that, pinning the things that call to you in one place, the threads of your personal taste will start to emerge - guaranteed. The key is to absolutely only choose that which you truly love. Research is all well and good, but opinions have to be considered, not copied. As Chanel so succinctly put it, "Fashion is what's out there, but style is what you choose."'

'I have embraced the digital sphere with great gusto, as it presents unparalleled opportunities to communicate. I'm slowly getting all my various highly opinionated musings together on my website; next step is to upload all the great interviews I've done over the years, with people from Peter Greenaway and David Lynch to Pierre Cardin and Eva Ziesel. What I really love though is the way you can strategically weave together all your various platforms - Twitter, Pinterest, Facebook, a blog, Instagram - so that each presents a particular angle on your interests or brand, enabling different touchpoints for different users. It's all about telling stories. What do you want yours to say?'

'The October 2017 "Big Decorating" issue is my last as Editor in Chief, and it's very fitting because I hand-picked and moodboarded every single image, wallpaper, colour and fabric in the Decorating Colour Trends special based on my analysis of what was out there for the new season. It's very personal and I'm very proud of it. It's also an issue dedicated to the best in British design as I've always been a vociferous champion of our home-grown talent. And that's why it was important to me to do a story on Soho House in this issue, as I see it as one of Britain's greatest exports! It's a vastly under-appreciated thing to be able to build a brand with such a strong identity, and then to take it to different locales and yet both maintain a signature style while also referencing a new context. Soho House has pulled that off time and time again. And with the launch of Soho Home, you're sharing it with the world now, too. You also have proper taps, towels and well-lit mirrors in your hotels! So that's me sold. It looks as good as it makes me feel. Result.'

Michelle can be found blogging at michelleogundehin.com 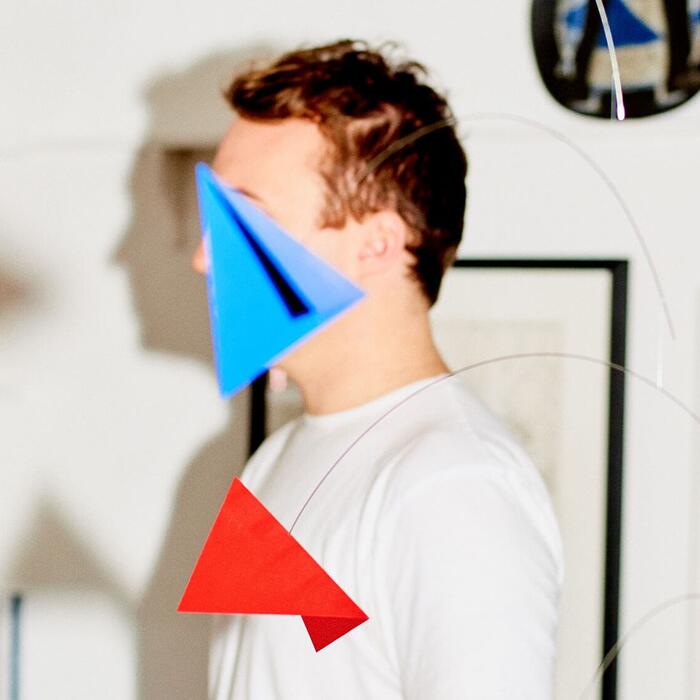 The art of collecting with Tobias Vernon 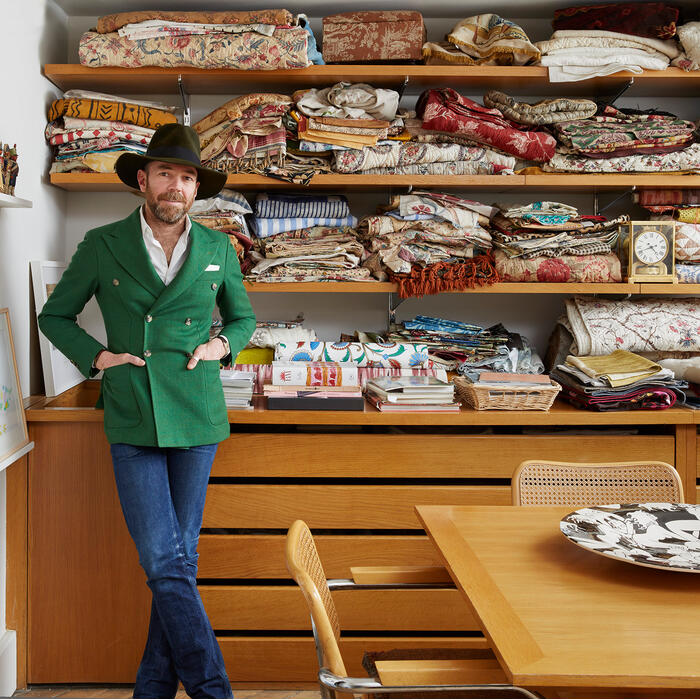 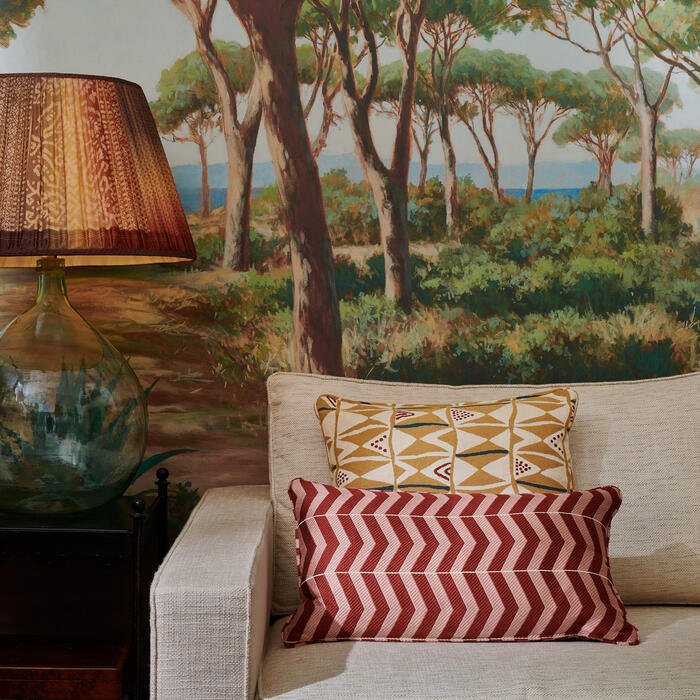