The secret to a well-curated space can lie in its simplicity. Let striking furnishings shine in a pared-back setting and you might be surprised just how much of an impact can be made.

Soho Home Design Manager, James Patmore, says this thinking inspired some of the pieces for the newly launched Soho Home collection. 'Historically, we have approached new seasons by designing a few statement pieces, but we're noticing that an appetite for bold furniture is only growing,' he says.

Every collection draws inspiration from a House, and the soon-to-open Soho House Rome's aesthetic was central to this process. For example, in the club, members will find 1970s silhouettes such as chunky seating and curved headboards, which influenced the bold shapes of upcoming sofas and beds.

'This isn't form over function,' says Patmore. 'We aim for something that's really exciting in terms of shape, but also extremely comfortable and practical. Nick [Jones] tests every sofa, chair and bed we create by lying down and kicking back on it, just to check how comfortable it really is. It's about bringing the style of the House home.'

If you're interested in experimenting with shape and form in your home, Soho Home Interior Style Manager, Candy Murray, shares her advice on styling a space using one bold piece of furniture as a starting point.

'Let the shape lead you first, that's the primary element. Pick a statement form you adore, then material and colour can be considered secondary.

'The idea is to put together sculptural elements that combine beautifully. It's a "grown up" look ­- you're aiming for everything to look curated and well placed. This mindset will help you when picking lighting, ornaments, and artwork, too.'

'The Wyatt sofa, for example, is a modernist design that would work well as the centrepiece of a living space. The trick is to let it be the star of the show; don't overcrowd it.

'I would advise minimal clutter and ornaments, especially on coffee or side tables. It's important to highlight the simplicity of the form, and for the sleek lines to be seen. A statement piece needs the space to shine.' 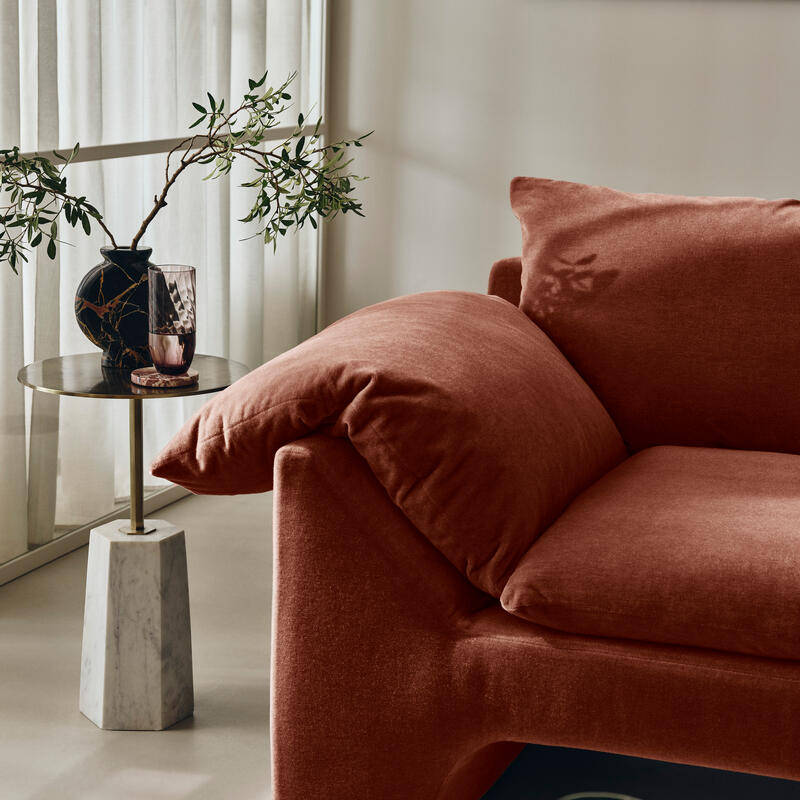 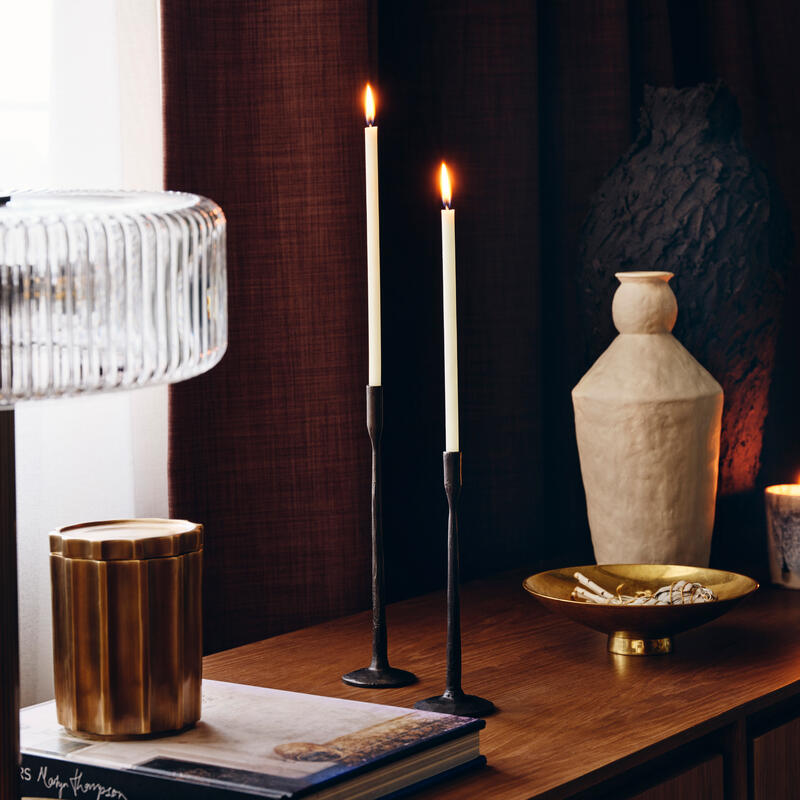 'In the Houses, it's important to us to pick the right rug, because it grounds the space. I'd recommend placing one underneath, or next to, a key piece of furniture.

'In the bedroom, ensure that you can see plenty of rug around the sides and bottom of your bed. For comfort, we position a thick-pile rug at the point of stepping out, so that your feet have something soft to sink into. While a patterned style looks great, don't go overboard. A rug with a gentle repeat pattern, like the Tiva or Flora, are just right.

'In the living room, place a rug just in front of a sofa underneath a coffee table. This is an opportunity to pick a style with similarly bold quality, such as one of Soho Home's hand-painted offerings. The Edgar and Marley rugs have striking, angular designs that would work well.' 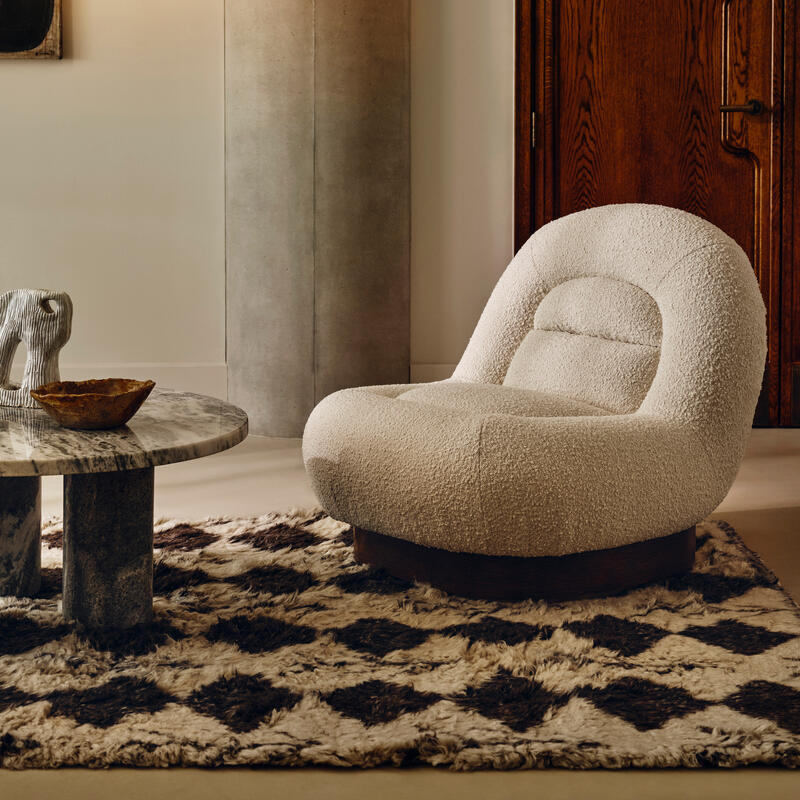 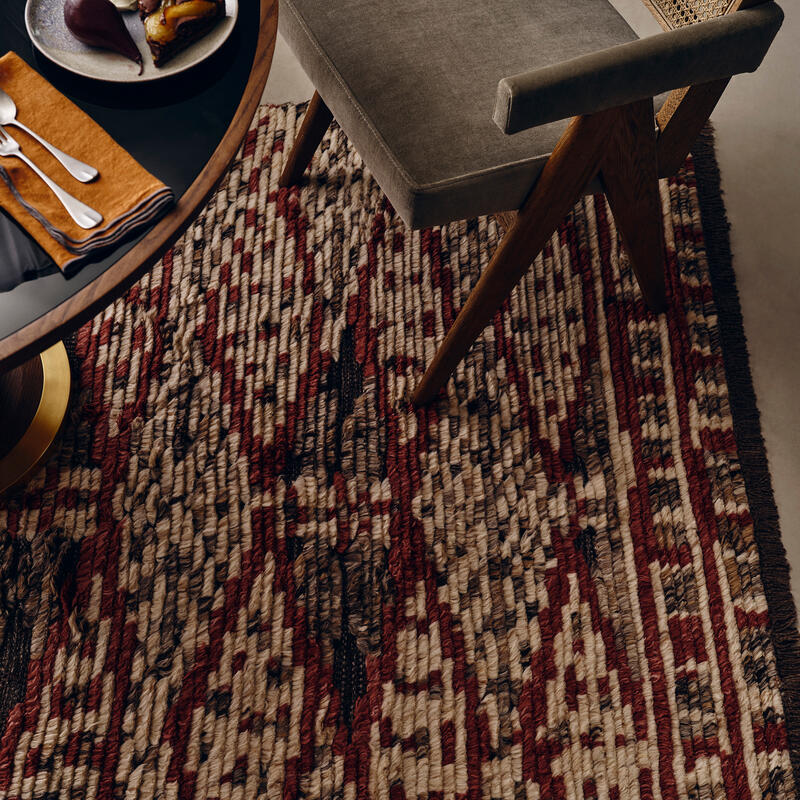 'Choosing form-led lighting for the space will dial up the design aesthetic for the entire room. A large, arched floor lamp with a sculptural look, for example, would look great in a living room. Place it just behind the sofa or next to a chair opposite.

'Keep other surfaces uncluttered so that a table lamp with an interesting base can stand out. While we wouldn't select an oversized lamp for next to a bed, curved shapes or exaggerated exposed bulbs work nicely.' 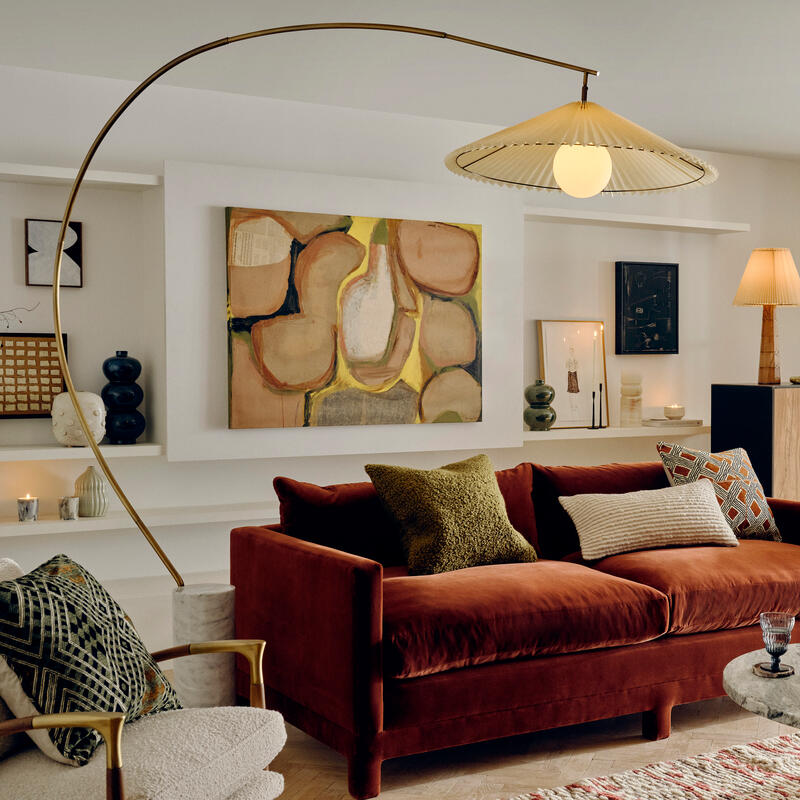 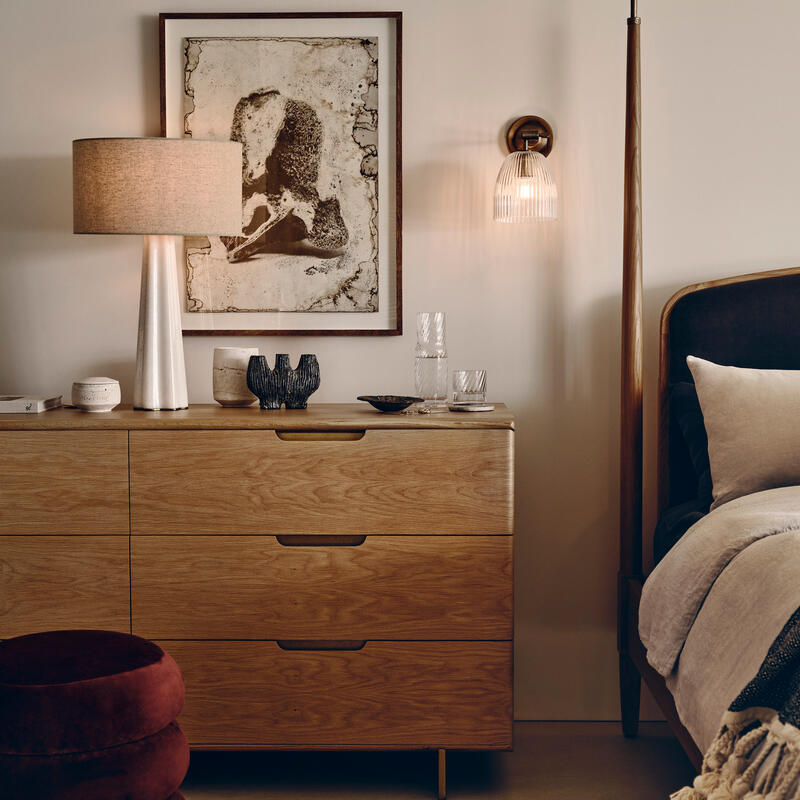 'In the Houses, we like to adorn sofas and chairs with a number of cushions to keep our members comfortable. How you arrange them depends on what you find most supportive for your posture or how you like to relax. For an investment piece such as the Wyatt sofa, I'd try and complement it without covering it.

'For a stylised look, I'd position two oblong cushions at either end of the sofa, leaning gently onto the arm, in a muted colour or calming pattern. If, however, you'd like more coverage than this, try mixing two square cushions in a solid colour with one patterned oblong one.'

This curated look is effective whether your home is an industrial loft or a period townhouse. If you're looking for more expert advice on how to furnish your space, become a SOHO HOME+ member and book an appointment with our design service (UK only) and our team will help you bring the House home. 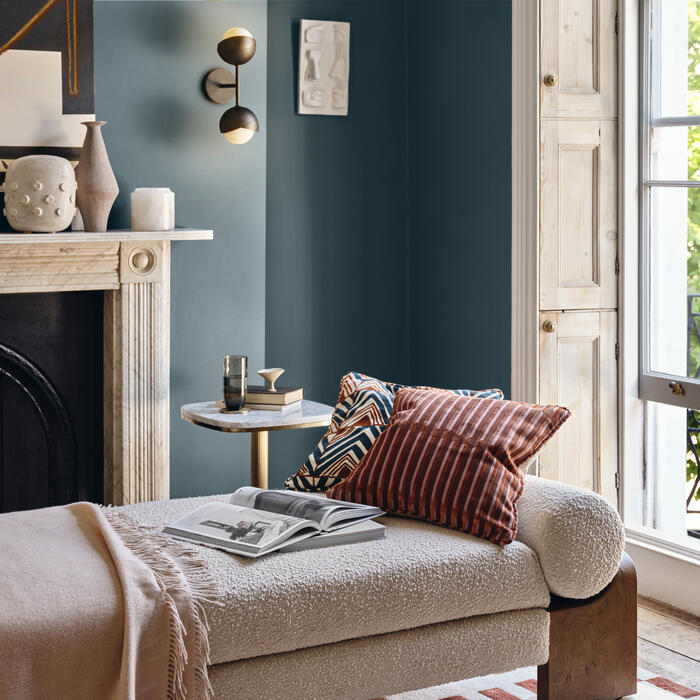 How to incorporate darker paint colours into your home 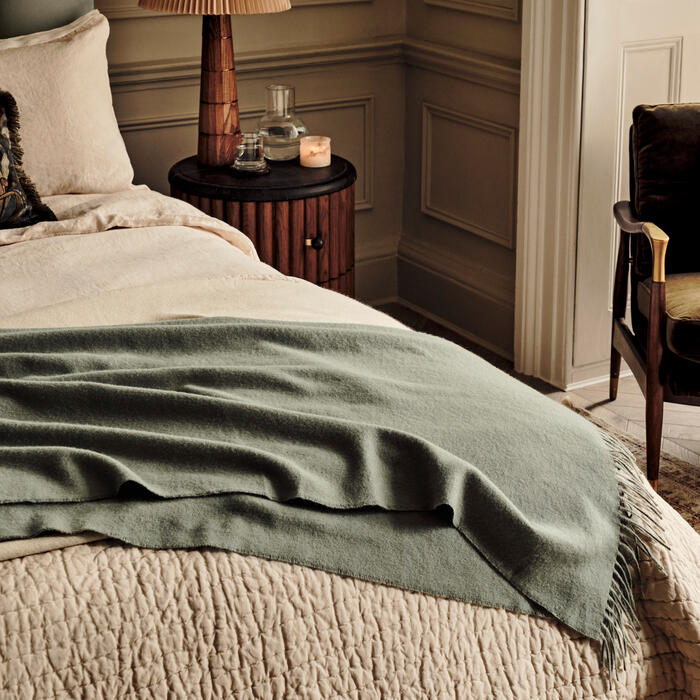 How to make overnight guests feel at home 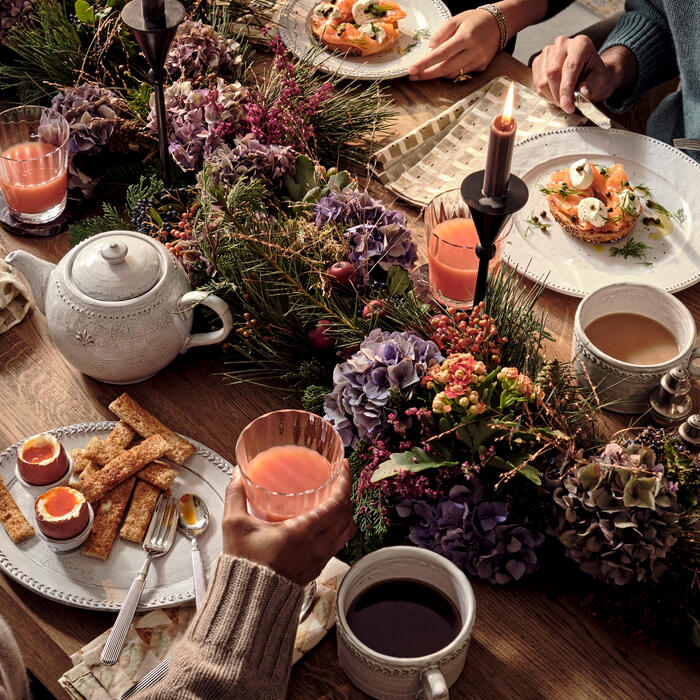