Katherine Ormerod is part of the vanguard of creatives who is successfully navigating a path through the ever-changing digital landscape. A fashion features editor and digital editorial consultant, she runs the site workworkwork.co and lives with her boyfriend Haden Gaynor, the New Business Developer at Nirvana CPH, in a flat in north London.

I set up workworkwork.co to create a space where women working in social media and other aspirational industries could share the rest along with the best. No-one’s life is solely a highlight reel and it just felt like it was time to remind everyone of that. But just because I’ve been divorced, struggled to conceive and had some dodgy moments with body issues doesn’t mean I don’t still love great heels and a killer Friday night dress, so really it is about finding that balance with your digital footprint. And while I’m certainly no oracle, it does feel like a step forward to be starting that conversation. Haden is also a trained menswear designer (and hairdresser) and works in fashion and lifestyle creative production at Nirvana CPH, so he’s also in the scene, too. It would be too much if we did the same job, but having an industry in common can be really helpful as he understands a lot of situations I deal with, and vice versa.

'I feel really lucky that I cut my teeth in the old world of publishing but I was malleable enough to be able to adapt to the new media. My first magazine job was at Sunday Times Style where I worked for a formidable editor who let absolutely nothing slide - the rigour and ability to work under a lot of pressure has definitely stood me in good stead. After Style, I moved to Cape Town for a stint then came back to London and segued into trend forecasting before I got headhunted to be Senior Fashion News & Features Editor at Grazia. I had three years of doing the full fashion editor shebang - shows in London, New York, Paris, Milan, interviewing designers and A-listers across the world and staying on top of every little micro trend. It was an amazing cross-platform job and it taught me a huge amount about both print and digital content. But by this point, I was in my early 30s and magazines were struggling. I knew I needed to work out my next step and it had to be something with more financial security.'

'I realised that there was a gap for a journalist to work with brands to help them up the quality of their digital content so I set up a small agency to bring together a range of creatives and influencers to create stories which actually felt editorial. In between then and now I also spent just over at year at Lyst.com working as the site's editorial director, because I wanted pure tech experience too. At the end of 2016, I was sure I wanted to work for myself again, and as I'd been building my social media audience over the years, it felt like the time was right to launch my own platform. But as a 33-year-old with a long career of writing behind me, I just didn't want to do another outfit post website - there are so many people doing it so well out there and I also felt that there was a real sense of reality missing from the space.'

'One of the big problems with social media is that it's really a visual channel, and while a picture may speak a thousands words, most of are misleading. As readership of magazines has declined, we've lost the balance between sexy photoshoots and real-life stories and features. We've also got used to a fantasy world of perfection where the unphotogenic sides of life have been edited out. Everyone has parents, everyone encounters ill health in some way, no-one has a flawless marriage or relationship with their friends or kids. Privilege or even having a million followers on Instagram doesn't insulate you from tragedy. But somehow we've all bought into that image. I just wanted to burst the bubble - not in a downer way, as I love posting nice pictures and the fun side of social media as much as anyone - but just to say yes, this is all very lovely, but it's only a very small part of the story.' 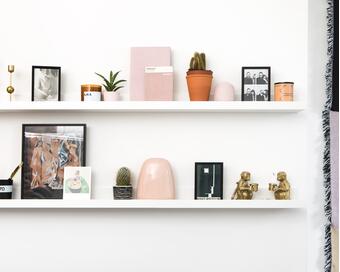 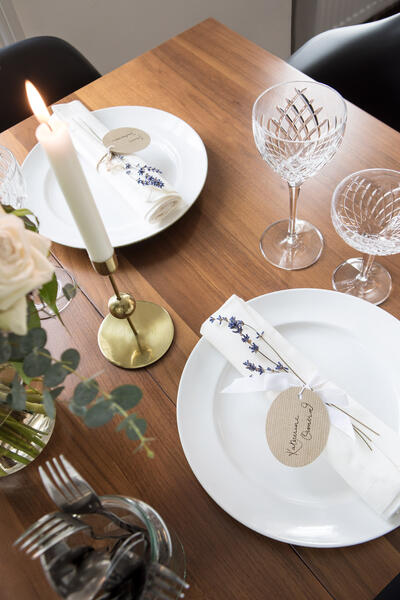 'I love the upholstery in all the Houses, so those are the Soho Home pieces I love the most. It's the old-school quality and finish that you know will wear in like your favourite pair of jeans. We have the Betsy armchair and it's one of those pieces that will follow us for life, no matter which city we end up living in.'

'I love Soho House Istanbul for its sheer, unadulterated grandeur, but it's probably Farmhouse that wins the prize. My worryingly regular visits there are a matter of ridicule amongst my friends, so much so I now call it my timeshare in Oxfordshire. I'm a total city person and really have limited tolerance for the countryside (can't drive, hate English weather, like wearing heels) but Farmhouse lets me blow away the cobwebs without being too far from a great Margarita (or whatever alcohol-free option I'm allowed at the moment!). I even like the tents, which is a sentence I never thought I'd say.'

'I love colour and print in fashion. My style is really feminine and that's definitely reflected in my interior taste. I'm also not a big trend obsessive - I prefer classics and I definitely don't chase the edgiest look. But I am interested in independent designers and finding hidden gems, and that's true for fashion and decor.'

'Our most precious objects are definitely the artwork - a print from the Mexico Olympic Games signed by graphic designer Lance Wyman, a print by artist James Parkinson (also a close friend) and a painting that Hade's mum gave him which is hanging in our 'poolside' frame cluster in the bedroom. I'd also miss our Eames dining chairs (the ones that Haden chose) - we saved up and bought them one by one over a year and getting the final one did feel like an achievement.'

Serves four as main, six as part of a tapas-style menu

Juice of half a lemon

'Mix all the ingredients except for the passata and tomatoes into a bowl. Knead the ingredients into each other to help the mixture stick together. Take a small handful of mixture and roll into a two-inch long shape. When you've made about 15 koftes, brown in a frying pan in olive oil under a medium heat. When browned on each side pour off the excess oil then add the passata and pomodorini tomatoes sliced into two. Bubble on a low heat for 35 minutes. Serve with flatbread and tzatziki.' 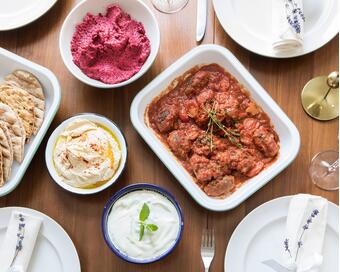 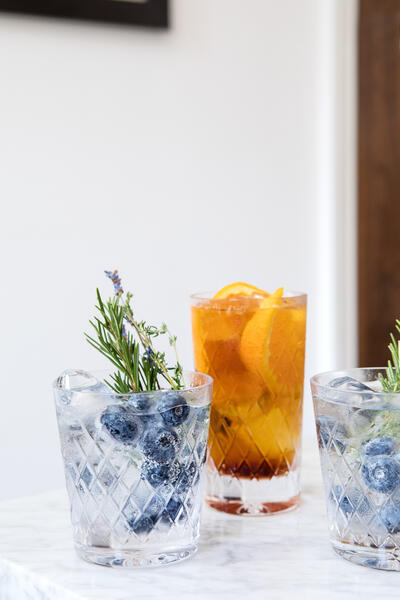 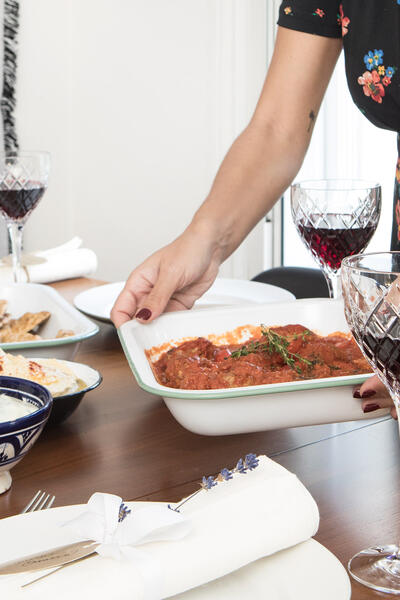 A sprig of lavender, thyme and rosemary

'Since I've been pregnant I have really struggled with cocktail hour - and am royally fed up with syrupy, juicy drinks. A smoothie is not a cocktail. Thank heavens that Seedlip launched and now I can have all sorts of delicious herby cocktails. This is a quick one to whip up and the frozen blueberries keep the temperature perfect. Mix all the ingredients together in highball glass, swirl and add a squeeze of lemon to taste.'

'Another tip is to open your rose bottle an hour before serving and decant a few splashes into an ice tray. It's the perfect way to keep it icy while not diluting the subtle blush with water. And don't worry not a drop will go to waste!'

'I'm a massive fan of modernism but I definitely also like things to feel cosy, so for me it's all about softening the edges and bringing an eclectic twist to a classic look. When it comes to form and function, I'm definitely more on the style side, while my boyfriend Haden is obsessed with comfort. We meet in the middle by layering textures like sheepskin throws, velvet cushions and wall tapestries with more angular furniture. I also love a mixture of personal touches, but I hate superfluous clutter and mess - it has to feel airy, organised and serene. Art is also central to every room. I have close to a hundred prints and posters which I've picked up from galleries around the world and love playing with palettes and graphics. Hmm, how do I say this tactfully? Haden chose the dining chairs. The rest…'

'I love a casual mid-week dinner with one or two friends, but a proper dinner party needs some prep, so I prefer a Saturday night. I really, really like to host and love the planning and preparation that goes into to it. Sometimes I'll start prepping food on Thursday night and can be in the kitchen all day long making every little dish, sauce and side from scratch. When you make an effort with a some theatrics it makes everyone feel a bit special and that's really key to entertaining. I definitely like a theme - a Middle Eastern buffet is a speciality - and far prefer multiple sides and sharing plates than anything strictly plated. I basically treat every cuisine like tapas. As for the noise level, two or three cocktails and limitless good-quality wine is guaranteed to keep the laughs coming.'

'Add some informality by putting all your cutlery into a jar rather than laying it all out on the table like a restaurant - plus it will give you space if you need to add in one more plate at the last minute (French friends always bring an uninvited plus one, so it always pays to make 10% extra food!).'

'Add bleach - about 1/4tsp - to your flower water and it'll keep them fresh for a week. There's nothing more disappointing than getting a beautiful bouquet for a dinner party then seeing it wilt along with your hangover the next day.' 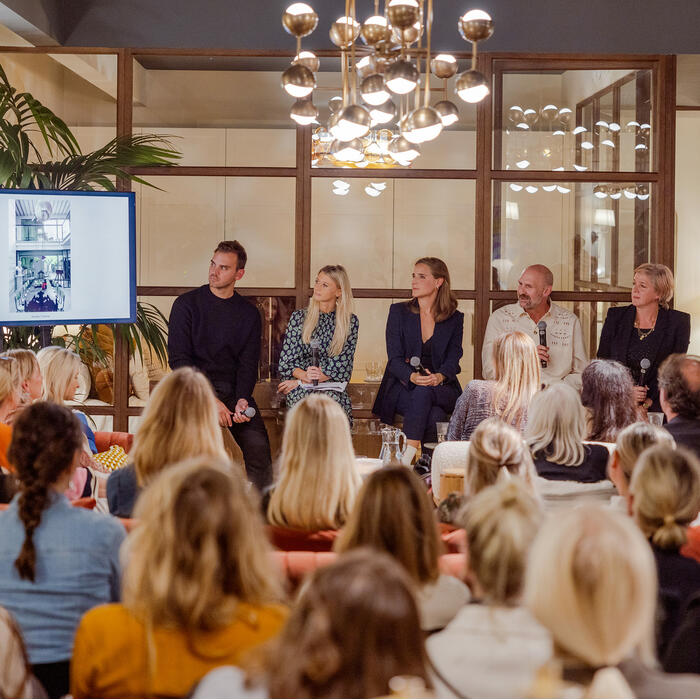 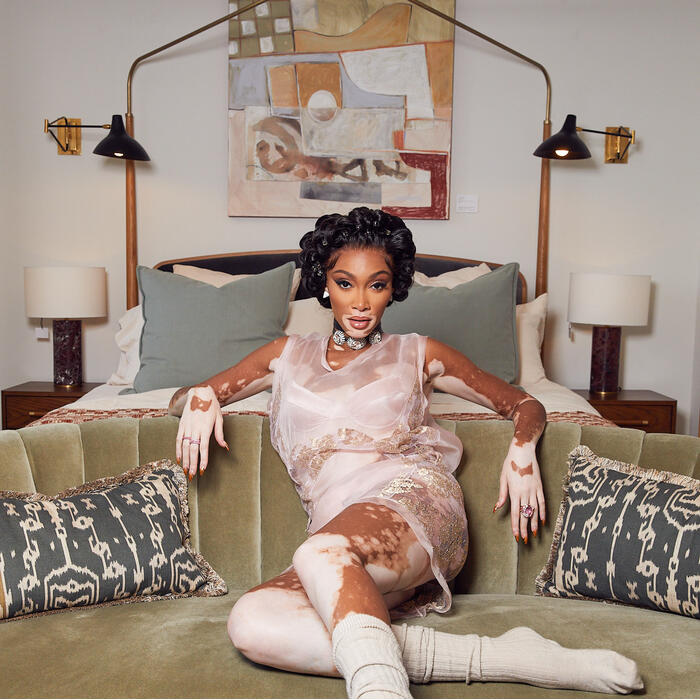 In the Studio with Winnie Harlow: ‘I want to create a space I’m obsessed with’ 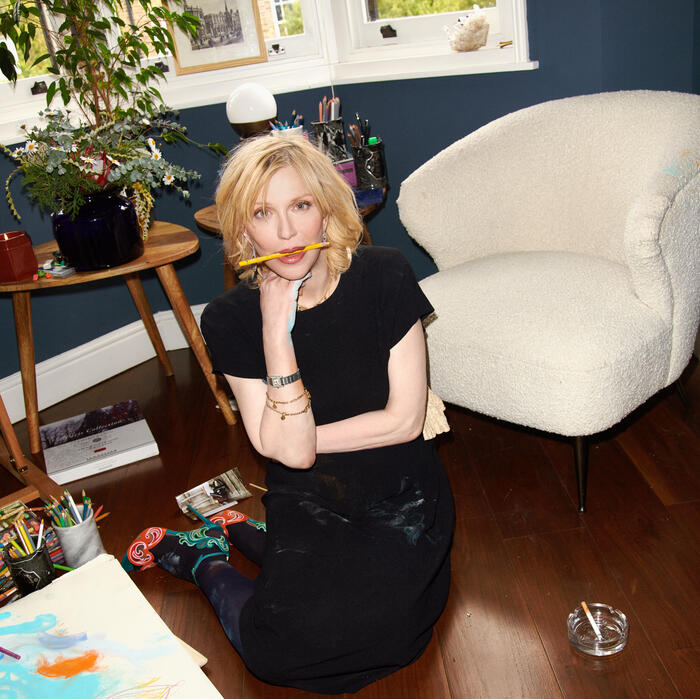