Follow a muddy lane through the green fields of Somerset and, at the end, you'll find a magical old house with turrets and scalloped slates that's half fairytale gingerbread cottage and half castle. Its current chatelaine, Pearl Lowe, lives here with her husband Danny and their family. The interior is a riot of ribbons and roses, neon signs, flea-market finds and samples from Pearl's vintage-inspired dress line hanging from antique armoires and over the bannisters of the sweeping central staircase. She told us about her very personal approach to interior design and why a bedroom should always be enchanting, whatever your age.

A good friend said, ‘My friend’s selling a house and you’re going to flip when you see it – can I take you there?’ It was way out of our budget so I thought OK, I’m just going to have to love it from afar. I watched it on the market over the years and finally I bumped into the owner and she said ‘I know it’s your house’. So we came over, it was sunny, there were horses in the fields and it was just magical. She said ‘Make me a silly offer’ so we did and we got it! We’ve got pictures from 1901 of the man who built the house for his wife – all I know about them is that she had 10 children, she wore a crown and her name was Augustus!

'Our previous house was a farmhouse. I tried to do my decorative thing on it and it just looked awful. I realised when I'd done it up it wasn't going to work, so we sold it after six months of being there. A house like this really suits my interiors because it's a pretty house and that's how I decorate - whimsical, fairy-like. Because of the vastness - it's got 11 bedrooms - it really overwhelmed me and I probably should have done what I do for my clients, which is get proper drawings made up and have a plan for what I was going to do in each room. It's really hard when you move into a house because you don't know where the light is, colours work differently in different rooms, so you have to really live with it for a while and I didn't. We moved in with the decorators and did it all in eight weeks, plumbing, electrics, everything. I made quite a few mistakes and so I am on my third decoration but now I'm really pleased with a lot of it.'

'I fell into interiors simply because people would say, "Can I shoot your house?". It would be in a magazine and I'd get an email from someone saying "Would you do up my house?" and then they'd tell their friends. Really, I should just do it for myself because it's quite stressful doing it for other people. I have a vision and I'll go in to a house and if it's enchanting, I'll think it should look like this and then they'll say "I don't like that colour" or "I don't like pink". I think well why did they get me? Because they know my style!'

'Normally I keep my beds from other houses and I bring them in and work around the bed. My starting point is always the bed. If I look back at all the houses we've had (because we've had a lot!) there's definitely a running theme - I like magical things and I like things to look feminine (which isn't great for the boys!). My son Frankie wanted a turquoise room and an orange velvet bed and I was like "er, OK!" and then I went on eBay and put 'French antique orange bed' and one came up in Frome in a king size! So he's got a really beautiful room now. I used Abigail Ahern paint and Moroccan rugs - it's a gorgeous attic room and works really well.

I think bedrooms should be sensual if you're older, married or with someone. I've got this amazing neon by my friend Zoe that turns the whole room red - it's really beautiful at night. For kids, it's got to be magic - sparkly and fairytale-like. I had such fun when the girls were little because I would make their rooms enchanting. When I was a kid my mum asked me what I wanted in my room and I said red and white and it was pretty revolting. She did all these flouncy curtains but I had to live with it because I chose it! When I was a teenager I got into Duran Duran and Adam and the Ants and I just had posters everywhere, and Debbie Harry. I don't let the kids have posters and they hate me for it! I've said they can frame them. One of my kids was really into Nirvana and I said, "OK that's fine, I can frame them…" I'm so mean!' 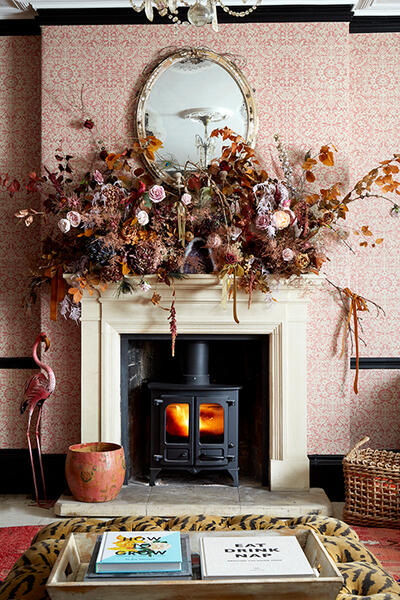 Beauty in the imperfect

'I love anything that's old, that has history. I can't buy modern. I surprised everyone when I bought a modern cabinet. They were like, "Wow, that's the first time we've ever seen you get something new" and the reason was I needed a larder and I needed it to be functional. The thing with antiques is that they're rickety and they don't work very well - Danny will pull out a drawer and it'll fall on the floor, the knob will come off… when you've got a big family and lots of friends staying, you don't want things breaking all the time, so I appreciate that sometimes people just want something modern because it works. I like that broken edge, things that are imperfect - there's beauty in it. It means that it's lived and someone else has owned it and loved it and you've got it.'

'I went to the Clignancourt market in Paris and found a fringed lamp - it's in the front room. There was this old lady and I said how much is the lamp and Danny said to me, "We're not getting that, we're on the Eurostar…" and as he turned around I said "How much?" and she said "80 Euros", and I said "OK!" and I gave her the money, and he went mad. I had to hail a cab and put it out of the window! At customs, it was so heavy and they said, "What is this?" and Danny said "It's my great grandmother's, and she died, and I've got to bring it home," and they were like "OK!" and we took it on the train and brought it home. It's been with us for years and it's perfect!'

'I've got the antique vintage thing and I like lots of prints and fabrics and textures. I like things just being all thrown in - sometimes it works and sometimes it looks awful and you have to change a few things. Definitely cosy - I like things to be like where you want to curl up in a room. I love that feeling of cosiness. It has to be lived in - my worst houses are the stark 'no soul' houses. I don't care how many millions someone's spent on it, for me, it's not my thing.'

Learning from her mistakes

'The bedroom I got right straight away, the bathroom took three goes! I had wallpaper first and now these Bert & May tiles, but I think it works now and I'm really happy with it. I'm blowing my own trumpet here but I'm really great at finding furniture bargains. I can place them somewhere and they'll work - I'm good at that. Colour isn't necessarily my strongest point. I guess it's just because I've struggled with this house - I've actually been asking Danny!' 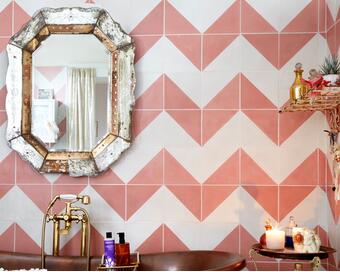 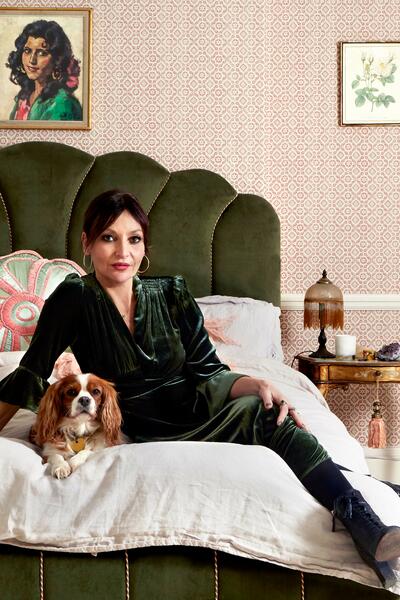 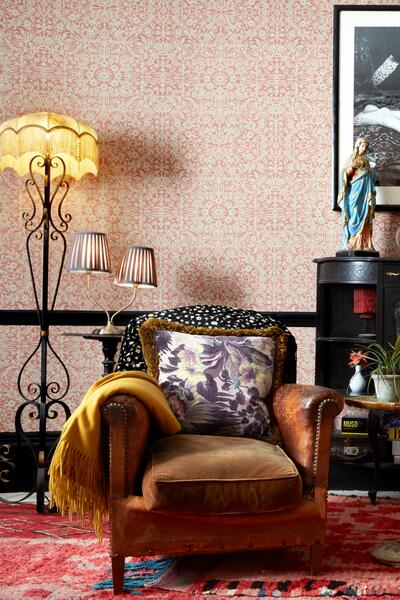 'I'm obsessed with chandeliers but sometimes it's not that cosy just having a chandelier right in the middle of the room - it's so much better to put little side lamps everywhere. What I love about Soho House is that next to the beds there are these lovely little lights; it makes it cosy, and people underestimate how important that is. I would say lighting is the thing you should invest in, then curtains, because they make a room really cosy. I go for antique curtains - they are hard to find so you have to wait, which is boring if you're impatient! Danny's like "Why haven't we got any curtains?" and I said "We just don't, I don't have any that go" and he says "We need them now!" and I'm like "No, we can't - we can't put up curtains that will look rubbish. They'll come, we just have to wait." My interior designer friends say the thing they have most trouble with their clients is that they can't wait. They want it all done yesterday and that's hard - to find things that are going to immediately fit.'

'In the summer there is a sunset - I swear the whole house turns orange. I get shivers. I used to say to Danny "I really want a sunset" and he'd say "Pearl, what house has a f**king sunset?!" and when we moved here I didn't even know about it. Then one day I just saw it and said "Danny! Look at our sunset!". That's what I love about it, and autumn - we've got a very rare tree and it goes bright yellow. Autumn's lovely here. We bought our first house 23 years ago, but this is the first house I can honestly say I don't want to ever leave. I've said that to my kids - "This is where I want to live until the day I die!" The only thing I might want to do is buy somewhere away, somewhere warm. Somerset, when it's hot or it's spring or autumn is lovely, but from now until March it's really hard. You have to be pretty hardy to live here, it's brutal - it's the wettest county, but only in those months. By March, it's magic again.' 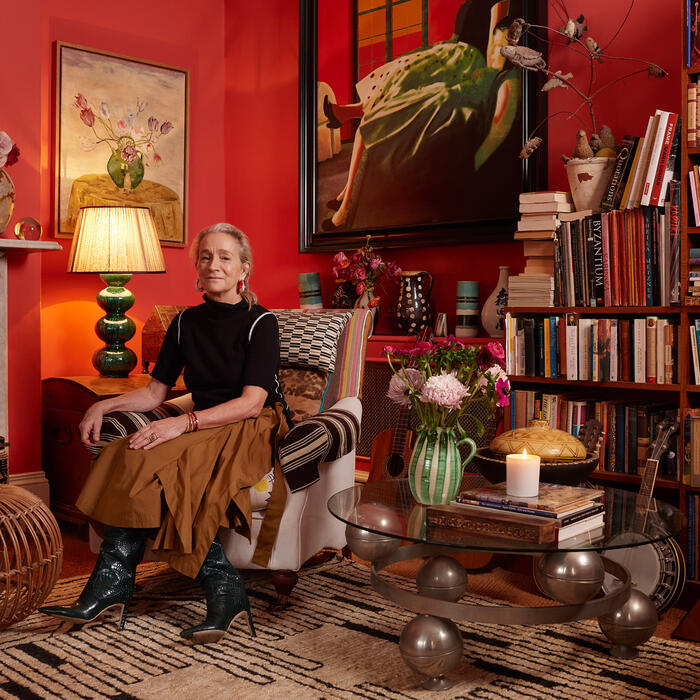 At home with: Lucinda Chambers 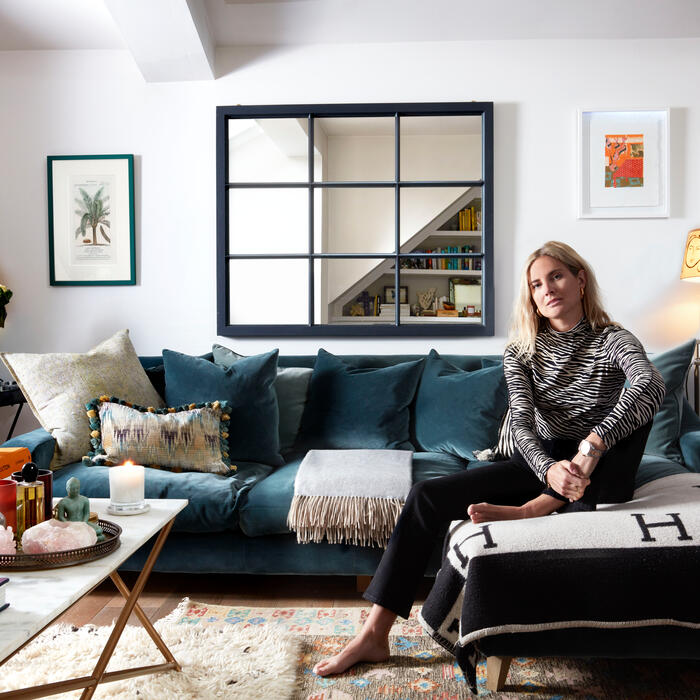 At home with: Lucy Williams 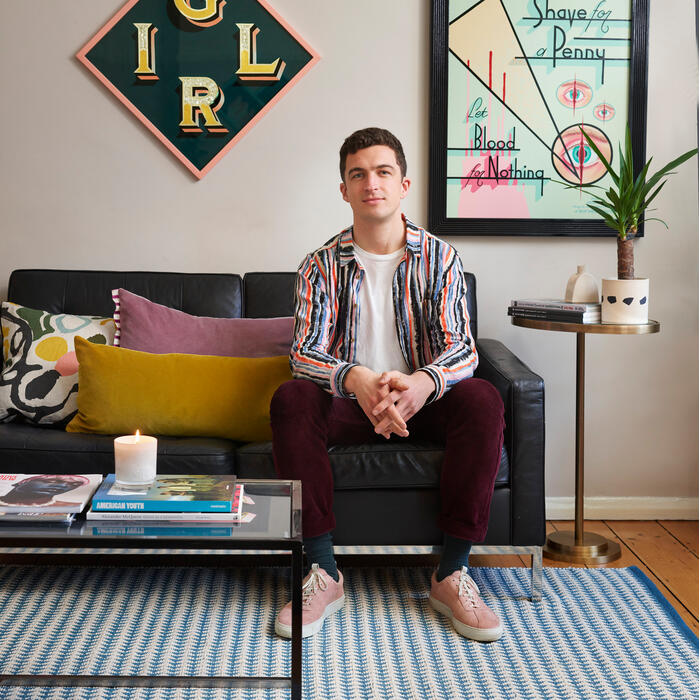 At home with: Archie Proudfoot